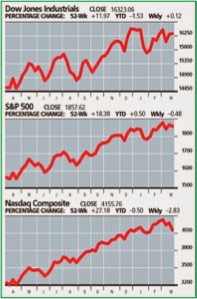 Contributing to the fall were concerns about many stocks’ rich valuations and lawmakers’ questions about high drug prices. During the quarter many stocks struggled to maintain the upward momentum of 2013, though they remained near record highs a majority of the past three months.

Fortunately for investors, stocks staged a broad rally on the last day of the quarter and kicked off the second quarter with major gains, propelling the S&P 500 to its seventh record close of the year. Although the Dow closed at the highest level of 2014, it was still 0.3% short of its December 31st record finish. (WSJ – April 2, 2014)

The U.S. economy expanded at a 2.6% annual rate in the fourth quarter of 2013, up from 2.4% due to a revised calculation. Many economists expect economic growth to rebound in the second quarter as the weather improves. (WSJ – April 4, 2014)

One major problem in the first quarter was that U.S. exports fell in February due to weak demand overseas. This also caused the largest trade deficit since December of last year.  (WSJ - April 4, 2014)

Another area of disappointment came from new-home sales, which dropped by 3.3% in February. Higher mortgage interest rates and poor weather conditions seemed to contribute to the decline.

But let's look on the bright side. Most economic data has been positive recently and growth seems to be gaining traction, though at a pace less than we would like to see:

·  Real GDP rose higher than its earlier estimate, chiefly due to consumer and business spending.

·  The Conference Board’s Index of Consumer Sentiment climbed to 82.3 in March, its highest level in six years.

·  Orders for durable goods also increased, along with personal income and spending.

The bottom line is that things are continuing to improve gradually. According to sources at Economy.com, “The economy’s fundamentals are strong. Businesses are profitable and competitive. Household debt loads are low and credit conditions are strengthening. Banks are well capitalized and liquid. The fiscal health of government at all levels is much improved.” (Bob Leclair’s Finance & Markets Newsletter- Mar. 29, 2014)

The U.S. equity markets provided strong gains in 2013. Despite worries about Fed tapering and higher interest rates, Washington’s dysfunctional behavior and a modest economic recovery, the S&P 500 rose almost 30% for the year.  However, many investors started speculating about when the next correction would arrive and what could cause it.

The U.S. economy surged in the last quarter of 2013 and appears set to maintain that momentum. Even with this positive outlook, it shouldn’t surprise any investor if a market correction comes along and produces a decline of 10-12% and lasts up to eight weeks or longer.

One of the most obvious triggers for a correction could be a stalling U.S. economy. The economic data seem to show the economy continuing to recover at a modest pace, but there are still significant pockets of weakness and things could potentially change rapidly.

Another potential risk is high expectations for corporate earnings in 2014 and beyond. Many economists are skeptical that earnings growth can meet projections. If the market comes to the conclusion that the economy is not going to see that kind of earnings growth, this could be the catalyst that might cause a major correction. Also, an increase in the costs of raw materials, labor or interest expense could pose a threat to profit margins. If profit margins slip, current stock evaluations might prove unsustainable.

Outside factors are the most likely threats to the U.S. economy. Europe is a long way from resolving its problems or even being on a long-term path to recovery, and it could spin out of control at any time. China is changing its policies and those changes will affect the global economy. There are several significant emerging economies that could have debt payment or economic problems. A wide range of global political issues may also result in a crisis or war that could unsettle markets.

Of course, there may not be a correction at all. A major argument supporting that possibility is the fact that U.S. businesses are sitting on cash at a level not seen since WWII. According to Liz Ann Sonders, Chief Investment Strategist at Charles Schwab and Company, Inc., “We know the capital is there, but we haven’t had the animal spirits to put it back to work yet. But this is the year we’ll probably see increase in [capital expenditure] spending.” (Investment News–Feb. 2014)

Potential problems will always cause concern for the equity markets, but this does not necessarily mean you should constantly alter your portfolio. A prudent approach is to invest in a manner that will not cause you to be up all night worrying about your investments.

Long-term treasury interest rates moved a little lower at the end of the quarter. Many investors did not expect this when the Fed began to cut back on its bond-buying program. Although treasury rates have dropped, mortgage interest rates moved higher. This movement might have put a chill into new-home sales. Many investors are concerned that housing might not prove to be the investment that it has been in the past.

During this quarter, Federal Reserve Chairwoman Janet Yellen offered new assurances that the Fed plans to keep short-term interest rates near zero as long as unemployment stays relatively high and inflation low. This is what Ben Bernanke said throughout his term as Fed chief. On March 31st, in her first public remarks outside Washington since she took the Fed’s helm in February, Ms. Yellen said, “While there has been steady progress, there is also no doubt that the economy, and the job markets, are not back to normal health.” She also used unusually personal terms to describe why the economy needs these policies to support a weak job market, saying, “The Recovery still feels like a recession to many Americans, and it also looks that way in some economic statistics.” (WSJ, April 1, 2014)

The Fed announced on December 18th that it would start to reduce its bond‑buying program, and in January decreased its buying from $85 billion down to $75 billion. But how will the tapering process unfold from here? If left unchanged through the end of 2014, the Fed’s balance sheet will add $900 billion by December 31, 2014, taking the Fed’s total assets to $4.7 trillion. The Fed held only about $480 billion (i.e. $0.480 trillion) of securities in early September 2008. (Federal Reserve, Dec.  30, 2013)

The bond market continues to confuse many investors. Since the Fed announced the tapering, there has been an expectation that interest rates would rise. However, bond prices are actually higher and interest rates are lower.

The long end of the treasury yield curve has flattened a bit, which suggests that many bond investors don’t see much in the way of U.S. economic growth. That is one of the reasons that many investors have put their money to work overseas. (Barrons - March 31, 2014) 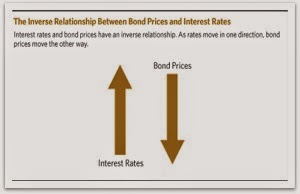 Investors might still put their money into long-term bonds for safety. In fact on several occasions, bonds delivered strong returns. Currently, though, with market interest rates at such a low level, it’s difficult to even think that bonds will be able to offer most investors that kind of return at this time.

In the past, bond yields might have been high enough to compensate for their drop in value even if interest rates increased. But today, with interest rates remaining low, the math just doesn’t work. Conservative and moderate investors still need to consider bonds, but they should proceed with caution. We will be monitoring the bond market carefully over the next year or two. (Money Magazine – Jan. 2014)

We are currently experiencing QE3, which started in September 2012 at $40 billion dollars of monthly bond purchases, increased to $85 billion/month in December 2012, and is now $75 billion/month. Five years ago, on President Obama’s inauguration day, the U.S. had a total debt of $10.6 trillion. By January 15, 2014, that number was up to $17.3 trillion. The increase of $6.7 trillion over this five‑year period equals an average daily deficit of $3.6 billion! (Treasury Department, January 20, 2014) 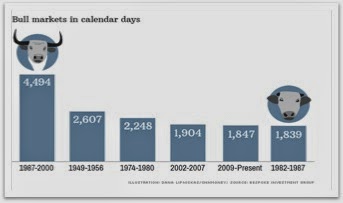 However, there is also some good news – reports in the first quarter of 2014 showed that December 2013 produced a surplus of $53 billion for the U.S. government. This was the first time that December has had “receipts in excess of outlays” since December 2007. (Treasury Department, January 2014)

What Should an Investor Do?

Be watchful. On March 9, 2014, the S&P 500® Index reached the fifth year of the bull market, which is quite an accomplishment. Since the global financial crisis hit bottom on March 9, 2009, the S&P has risen a cumulative 178%. This is quite an accomplishment: of the 13 bull markets since 1928, only four have made it to their fifth anniversary, and only two went on beyond a sixth. This worries some investors who fear the market might be nearing its peak. (Fidelity March 2014)

Put the current bull market into context. Today’s bull market has been strong, but it follows the third-worst bear market (a drop of 57% compared to the average of 37%). The current bull market also took much longer to return to its previous peak (4+ years vs. the 2-year average). While no one can predict the future, prior bull markets that survived beyond their five-year anniversaries went on to post much higher returns. (Fidelity, Mar. 2014, Bloomberg Finance, L.P.)

Minimize risk in the bond market. Bonds can still be a part of a diversified portfolio, but caution is probably a prudent strategy. Minimize your risk by:

·       Reducing the maturity of bond holdings
·       Using some bonds with floating rates
·       Using shorter-duration bonds
·       Incorporating some callable bonds, which can be redeemed before their stated maturity

Focus on your own personal objectives. Revisit your personal timeline. Understand your commitments and categorize your investments into near term, short term and longer term time horizons. We can easily help you with this.

Don’t try to predict the market. Ben Graham, father of value investing, has Warren Buffett as one of his most well-known disciples. Graham often said, "The individual investor should act consistently as an investor and not as a speculator." You are an investor, not a fortune teller. Base your decisions on facts, not speculative forecasts.

Discuss any concerns with us. Our advice is not one-size-fits-all; we will always consider your feelings about risk and the markets as well as your unique financial situation when making recommendations. For example, given today’s stock and bond valuations, and the expectation of many economists that interest rates will rise, “there’s nothing wrong with pulling 10 % off the table and sitting in cash,” says James Stack, a market historian and editor of the Invest Tech Research Newsletter.